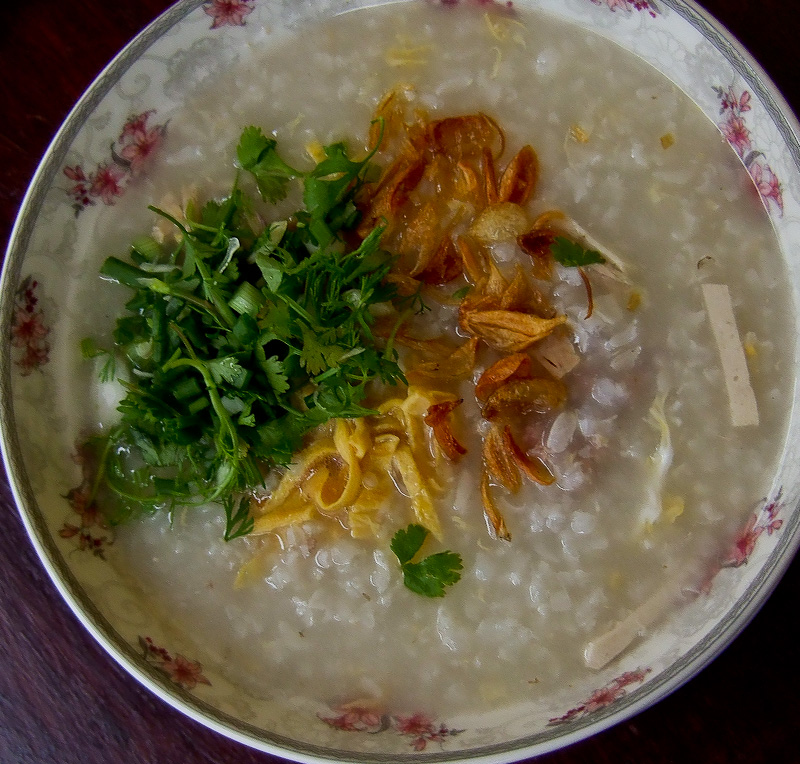 While in Luang Prabang we have been staying at this great little guest house – the Rattanakone Guest House – in Ban Thongchaluean, very close to the peninsula and the Mekong, also a hop, skip and a jump from Joma. Apart from a comfy bed, powerful hot shower and happy laid back family staff, they sport wonderful breakfasts – khao tom and noodle dishes. There is no menu, everyone gets the same, whatever has been chosen for the day. Showing intense interest in tasting you favourite dishes does definitely influence the cook though! Here is the khao tom, which is rice soup, with little meat balls, garnished with Vietnamese sausage, finely sliced omelette, spring onions, coriander (cilantro) and deep fried garlic. Its served often served with lime wedges, sugar, pepper, dried chillies fried in oil, fresh chillies, ginger, pickled turnip, fish sauce, Knorr or Maggi seasoning sauce and occasionally crullers – the Chinese style deep fried dough that look like reproducing mitochondria ??!! where did I get that idea?  Anyway, it tasted yum, and sets you up for the day.

It took me a long time to get around to eating khao tom (stupid me) because rice soup sounded unappetizing to my Western sensibilities. I finally came around while flatting with Malaysian Chinese students in the 1970’s. I think it was the fermented turnip that put me off at first! It has a very powerful smell.

Another breakfast served here is nem  kao (neem khao), folded and rolled squares of steamed rice pasta, stuffed with a fried mixture of mildly spiced pork and finely chopped cloud ear mushrooms. The stuffing  is only added on one side towards the end of the roll. Accompaniments include pounded fresh chilli sauce, a sweetened soy sauce, lime juice and ground peanuts. Rice noodle rolls originally come from China (Cantonese cuisine) and Vietnam. The version served at the Rattanakone probably is Vietnamese influenced, given the prominent business role the Vietnamese play in Laos and its use as a breakfast rather than as dim sum.

3 thoughts on “Lao Breakfast at Rattanakone”