Ever since I first espied the towers of richly deep reddish brown piles of tua nao paste resting in large basins in the Luang Namtha and Muang Sing markets I have wanted to know how to make this essential ingredient of the local khao soi noodles from scratch. I did some internet research and found some information about the fermented soy bean paste made in next –door Yunnan, China, and further away in Korea.  Determined after several years of making my own pork mince and fermented bean sauce using purchased paste I decided it was definitely time to go to Muang Sing, to track down the people who made it all the time for sale in the market as a local ingredient.

Like in a modern day Wild West, we drove slowly down the main street at sundown in our bright red Honda Jazz as town was wrapping up its business. We were about as conspicuous as a whore in a nunnery so to speak. As soon as we got out of the car Kees recognized a former guide who had accompanied him to photograph the opening of the Akha Experience trek for Exotissimo and GTZ. Well, it turned out that his family made tua nao paste, so at 8.30 the next morning we (Kees and I plus ‘intrepid camper in the freezing cold’, Sharon) set off to find that the font of fermentation lay in a Tai Neua village, Ban Nam Khao Hong.

Our guide, Than  Sai Kuatong (Kees’ mate’s little brother who needed to practice his English) took us to the village where we met his Mother, Nang Jantee, elder sister and hairdresser, Nang Buawon, Paw and their elderly next-door neighbour who makes the most superb fermented beancurd – but that’s another story!)

This family IS tua nao paste. At least twice a year they make the paste using 100 – 150 kg of dried soy beans, and set it to ferment in ceramic jars and Chinese plastic tubs for 1 – 2 years (up to 4 years). The older the better. They start selling it at 4 – 5 months.

There are only five Tai Neua villages in Muang Sing and only 9 in the whole of Laos, and this paste and the associated dishes is THEIR local dish. They take their noodles and paste down to Luang Namtha to sell at the market. They also tell us that in Luang Namtha they make a different type of rice noodle (round sheets that are then cut) and that the Tai Neua way is the proper way. (Again, that’s another story.)

The night before, Nang Jantee had dry fried 10 kg of soybeans until the outsides started to blacken until nearly burned but the insides were yellow. She then set the dried fried soy beans in a big pot with water on the fire at around 7 pm , where they simmered until the fire went out. Nang Buawon got up early and reset the fire so they continued to cook. By the time we arrived, they had been simmering for about 12 hours. They were soft but whole and certainly didn’t look burned.

The next step usually is to set the beans and their liquid aside in a covered pot for 3 days to start the fermentation process. This step produces the best fermented bean paste. Sadly, we didn’t have three days because of commitments in Luang Prabang. However, our demonstrator said you could do make the paste without the 3 days fermentation but it would not be the best although we would be able to learn all the steps involved. Deal. Also, not wanting to condemn all the beans to becoming inferior paste by skipping the three days, we only used a big bowl of beans, probably about 1.5 – 2 kg and gave the rest to the family.

Using a dipper, Mother transferred this smaller quantity of beans into a colander to drain and we trouped over to the pounder at the next house to pound the beans while adding the extra ingredients of chilli, and then salt. 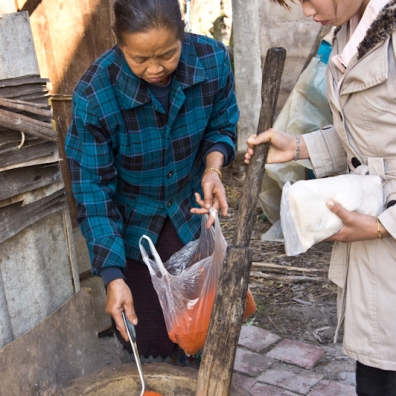 It took about 25 minutes in total to pound the beans because they had not started their fermentation process. When the beans have been left for 3 days they break up faster and more easily to form a sticky, gooey paste which is darker than the paste in the photos.

After the beans are pounded to initially break them down, chilli powder is added in the proportion of 1 : 10 (1 kg chilli powder to 10 kg dry beans) and pounded throughout the beans. Then salt is added, which is done by taste. Some pastes are saltier than others according to personal taste. Our small tua nao paste sample had half a large packet of salt added (about 500 g), a ratio of 1: 20. The salt was then thoroughly pounded in. Finally three ladles of bean cooking liquor were added, pounding between each so that all ingredients were mixed into a smooth paste. The consistency was a bit wetter than either smooth peanut butter that has been newly opened or a Thai chilli paste.

The finished paste was transferred to a bowl and covered with a plastic bag to keep out the air. It had begun its 1 – 2 year journey of fermentation. I now have it in a plastic lidded container in the back seat of the car and we will take it to our home in Bang Saray, Thailand where it can happily ferment away. I learned that although the family say the fermentation process is one to two years, they were using 5 month old paste themselves and had taken some out of a big tub to sell at the market while the paste was still a teenager by tua nao paste chronology!

Here a spoonful of the sample batch we made after a few years fermentation – its much darker than paste made with the traditional 3 days fermentation.