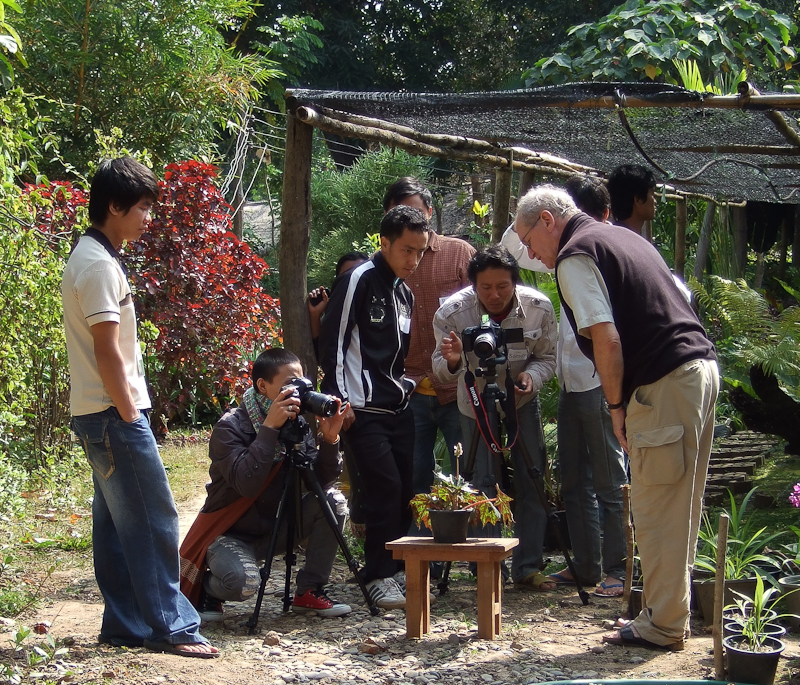 Last week Kees was coaching young botanists (new grads form NUOL) and other staff from the Pha Tad Ke Garden in Luang Prabang. The garden isn’t open to the public yet as it is still being landscaped and plants take a long time to grow, but it should open in a couple of years time. The garden is on the opposite side of the Mekong River to Luang Prabang so getting there every day involved a tuk tuk ride followed by sliding down a steep river bank, into a very skinny, very long boat (shake shake…) and across the river. Early mornings the mountains and river banks were shrouded in mists. Two pullover temperature. Then the morning exercise came – clambering up the bank (the river is very low!) We did this for five days.

After a morning’s work we’d eat lunch, cooked in the local village. Here is a sample of the dishes:

The sook pak had both ginger and sesame seeds and lots of succulent long beans. This was accompanied by sticky rice and a chicken lahp which had beautifully balanced flavours.

Another day we ate aw lahm, which sported the whitest, freshest pieces of sakharn I’ve ever had and lots of  black mouse ear mushrooms.

While Kees and The young botanists were using the big Canon cameras I tripped around the botanical garden with my little “slip in your purse” Fujifilm Finepix with auto disabled. I haven’t got around to examining the photos in fine details, but here’s one of the inside of a sida flower (guava)

And this is torch ginger flower: 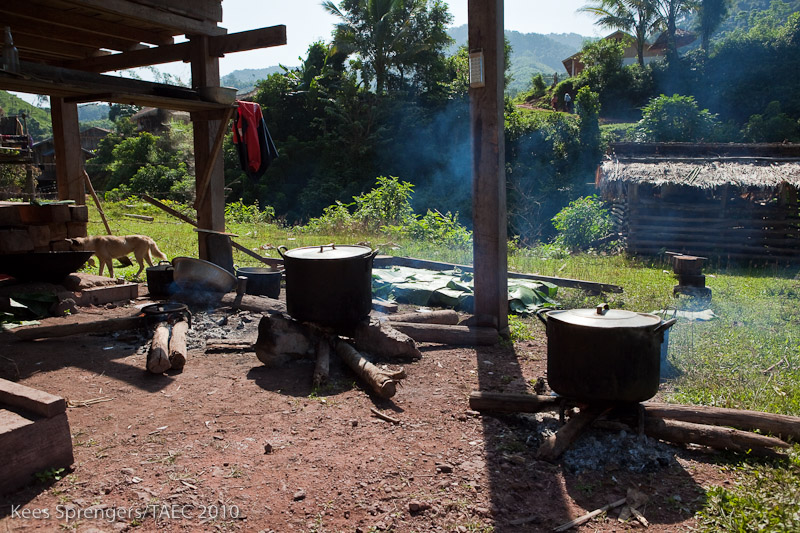 The next few posts will be about the party in Ban Chalensouk, a Kmhmu (khmu, kamu, khamu) village about 20 km south of Luang Namtha township in Northern Laos on Route 3 to Bokeo. This is Khamsouk’s village and she was organising a big celebration after returning from her successful Vientiane studies. In part, it was held to honour us as her study sponsors, but also I think, to make a statement to others that Khamsouk was returning to her village well educated and grown up – the first university graduate of village with her own local shop and a baby on the way. It was a two pig celebration (having encouraged her to spare the cow). I have a soft spot for cows, coming originally from a New Zealand dairy farm. (I didn’t know until my 20’s that the beef we ate could be female as well as male – I’d always thought after a life of giving milk, cull cows were sold for pet food – duh!).

We arrived by motorbike around 9 am, and the bamboo shoot and pork soup was already bubbling away. The bamboo shoots were from the forest and the pigs – well, they had been dispatched early in the morning and were sliced and diced well before we arrived. For details of this process, at an earlier celebration a few years before in the same village, visit Kees’ website in PBase.

Here is the outdoor kitchen, with the soup brewing:

And inspecting the soup:

Upstairs, which is usually the village official meeting place, the other dishes were being assembled by the women:

Pounded finely chopped galangal (tasting it I think that there was a fair wallop of Knorr or salt added to help the breaking down process), freshly pounded roasted chillies, msg and pounded roasted local sesame seeds were added and everything was mixed together:

The sa (spicy pork salad) meat had already been chopped finely and lightly fried with a bit of oil in a wok then left to cool. Rice vermicelli had  been soaked and drained and banana flowers finely shaved. The amount of shaved banana flower was roughly the same as the amount of cooked minced pork.

One woman pounded the fried minced meat to a finer consistency. I’d never seen this done before. I tried it a few days ago making lahp for some visitors and it gave a lovely fine texture to it (although I like it coarse as well). Also, two handfuls of medium-sized green chillies were finely sliced. Salad herbs were prepared – a mix of finely shredded spring onions and small coriander leaves (cilantro). Now came the assembly process. First the pounded pork and banana flower were thoroughly mixed and kneaded together with the sliced chillies and some of the meat juice.

The rice vermicelli (or maybe the noodles were bean threads – it wouldn’t matter which, but bean threads wouldn’t break up as much) was cut into smaller pieces about 4 – 5 cm long (2″) and lightly mixed in. No pounded roasted rice or lime juice was added, but salt and msg were. The herbs were added last of all and everything lightly mixed together, then served up  garnished with more herbs on small plates at the table.

Here is our breakfast, with the soop pak and sa made from the feast ingredients. A soup (gaeng) is also added and the banana leaves contain freshly steamed sticky rice, grown locally.

And one table of the post baci feast, before eating: 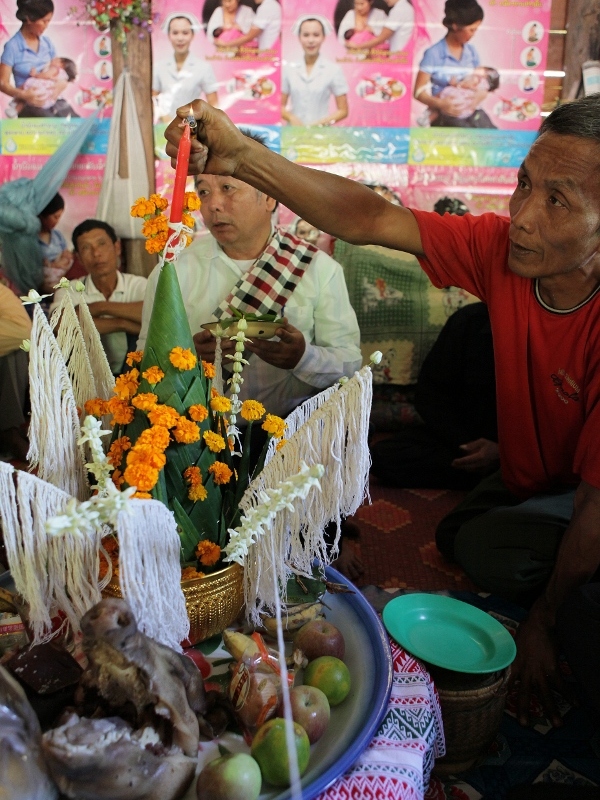 Kees and I are just back from Lao PDR and 2 weeks of fabulous fêting and feasting! I’ve got lots that I want to write about and will do so over the next couple of weeks. Kees is now sorting his way through hundreds of photos so we can put some in this blog and on his zenfolio site.

Highlights were the baci and party held in the Khmu  (Khamu) village of Ban Chalensouk in  Luang Namtha province, organised by the unstoppable Khamsouk.

We have heaps of photos to share of the two day celebration, including food preparation for the meal after the baci (all the ingredients were local products grown or gathered: sticky rice; vegetable soop (mixed cooked vegetables with galangal, chillies and pounded roasted sesame seed – yum!; sa siin moo – a lahp-style dish with heaps of finely shaved banana flower, and an excellent forest bamboo shoot soup with pork).

Other photos are of the baci and party (7 hours of non-stop dancing!) and other meals there – three before lunch the next day – plus photos and ‘how to’ for Northern-style khao poon, the Lao national dish of noodles and accompaniments all mixed together with a flavoursome soup. I hadn’t had time to record this before publishing the book so it was a top priority for this trip.

Northern khao poon is very different from the Vientiane version – the Northern version has lots of blood and blood products whereas the Central and Southern versions have pig’s head, liver, lungs and fish, plus blood products. I hope that does not put you off – each version tastes delicious, and the blood was very, very fresh.  You can also make a very delicious khao poon leaving out all the inside bits, so not to worry!
I also want to tell you about WIG (Women’s International Group) and the presentation we did in Vientiane about northern Lao food. This will include what we did to serve Lao food as canapés at the gathering of 70 plus people.

A common  ingredient in Lao recipes, a wide variety of gourds are grown in Laos. The gourd, leaves, flowers and tendrils are all eaten.

Use in soups and fry with pork. Sometimes it is used in bamboo soup. It is steamed in northern provinces and eaten during the rice harvest ceremony.

A small, rainy season gourd, it is used for soup or eaten steamed with jeow. Substitute any small biter gourd.

This gourd is very similar in appearance to zucchini (courgette). Its skin is dull, not shiny. Steam and eat with jeow. Zucchini is a suitable substitute. The leaves, ຍອດໜາກບວບ nyot mak buab, can be stir fried in the same manner as morning glory. Steam the leaves and eat with tomato jeow. Add to soup.

Fully grown water gourds are dried and used as water-carrying vessels. Small, 10 cm (4 in) long, immature gourds are eaten steamed with their skin on with a jeow or added as a vegetable to a soup or stew. They are quite bland. Substitute scallopini (patty pan squash). 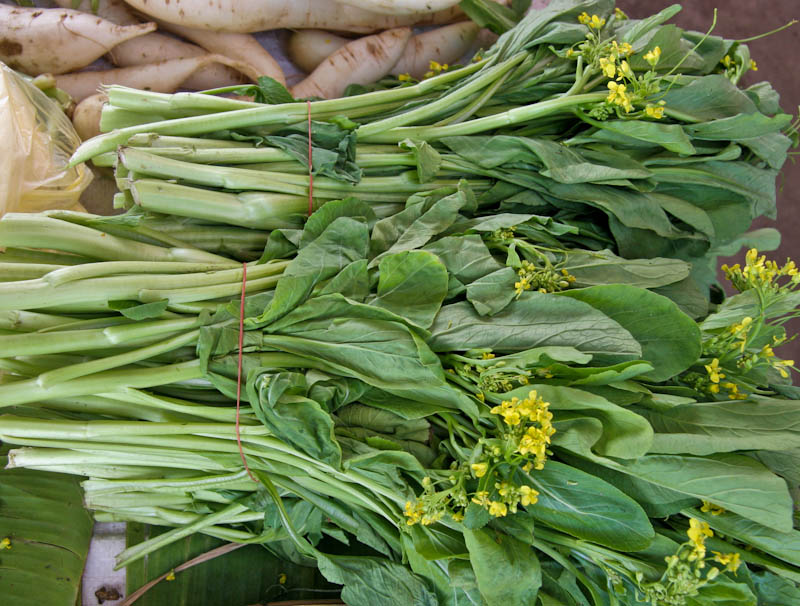 This green has yellow flowers and long stems. It looks similar to pak kaat kuang tung only bigger, with longer stems. Steamed, it is used to scoop up jeow. It is also used in stir fried dishes. It can be used as a vegetable for gaeng or soups where a mixture of greens is required. It is an ingredient for vegetable soop, a cooked salad. 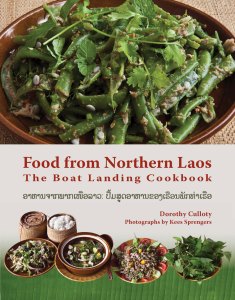